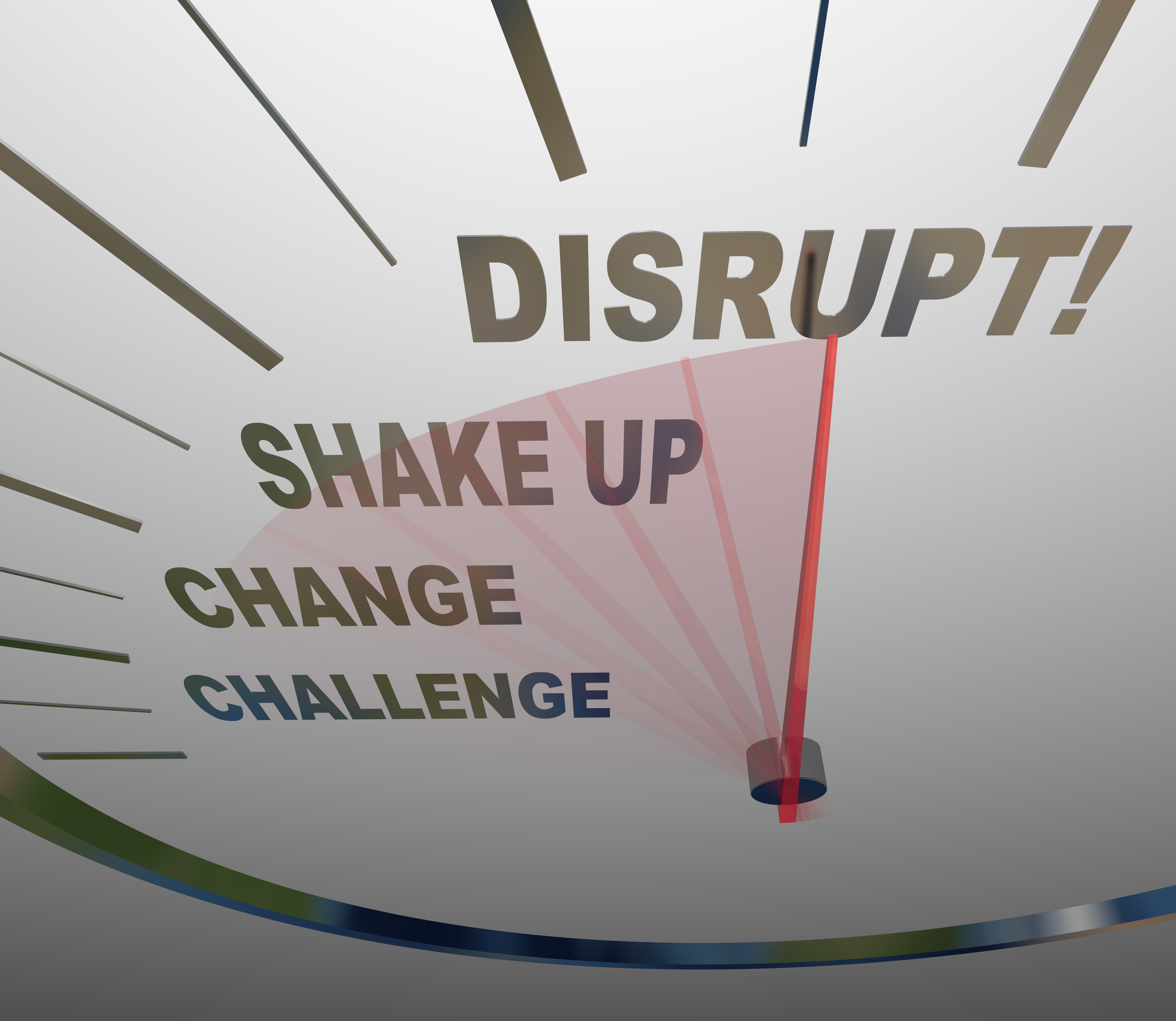 If, like me, you’ve been trained to think of disruption in negative terms, it’s time for a change. Used correctly, disruption can be the most thoughtful and creative way to shake things up and make people take notice. Disruption means doing the unexpected. The basic theory of disruption has been around since 1995, and historically was used for businesses trying to get a foothold in and undermine an existing technology marketplace. But the traditional construct has long since been surpassed by those individuals and corporations with new ideas.

The theory of disruption is started in computer marketing. The traditional computer CEO in the 1990’s employed design, production and marketing teams focused on making the best computer ever and selling it for huge amounts of money to large international corporations. Then, along came Apple. “Forget the large companies,” said Apple. “Think different!” said Apple. “Sell a less perfect computer to all the individuals who want new technology and undercut those large companies completely,” said Apple.

What did Apple succeed in doing? It succeeded in disrupting the marketplace. It is the prime example of disruption theory in action.

Without realizing it, in your everyday life, you have been the “victim” of brilliant forms of disruption theory. Today’s most obvious example of disruption theory in action occurs in the news dissemination industry. How do you get your news, weather, politics and entertainment?

The days when it required reams of paper to create and sell the New York Times, Washington Post, Newsweek and even Bon Appetit are long gone. Instead, we watch television news. Remember when Ted Turner calculated that we would watch news on television 24 hours a day and he was thought to be crazy, not a visionary? Now we get most of our news on t.v. And think about Huffington Post, The Daily Skimm, Buzzfeed, and Flipboard – minute by minute we are fed the news.

An article in the Harvard Business News recently noted, “Disruption is a predictable pattern across many industries in which fledgling companies use new technology to offer cheaper and inferior alternatives to products sold by established players. Today, a pack of news startups are hoping to ‘disrupt’ our industry by attacking the strongest incumbent – The New York Times.” Face it, The New York Times writers are generally more informed and more articulate than the headline news we get with regularity on our cell phones. But they are not reporting up-to-the-minute and they cost a lot more money.

The most entrenched companies and people are taught to succeed by improving products, upgrading technology and listening to customers – all part of simply sustaining the normative. That’s what the old computer companies and traditional news dissemination sources did until they were utterly undermined by “disruptive innovations.” Often these disruptions seem counter-intuitive to success, yet in the end they do succeed, so that digital technology takes over the behemoth Kodak, for example. Digital was in its infancy inferior to film, but those with innovative and creative thoughts saw the future and it is now with us.

Uber is another great example of disruption theory in action. The person who thought that we’d never have to hail a yellow cab again – that person was thinking way out of the box. And what about AIRBNB? Let me tell you, that concept is mesmerizingly simple and exceedingly brilliant. It has shaken up the hotel and lodging market completely at no cost other than creation of a website.

And, lately Beyonce has been touted for her brilliant new market strategy. She never marketed her newest release AT ALL. She took disruption theory to an all-new level by engaging in zero promotion. Her album (yes, ironically enough, still using the old-fashioned word “album” while employing cutting edge P.R.) includes 14 tracks and 17 videos. It was a total secret until suddenly released. As fans learned of the new video and music on Twitter, Facebook and Instagram, they started to frantically download – so much so that iTunes was temporarily shut down! In one day, Beyonce sold a record 450,000 digital copies of her album, totally disrupting the established methods of releasing and promoting music.

The theory of disruptive innovation is explained brilliantly in The New Yorker:
“A pack of attacking startups sounds something like a pack of ravenous hyenas, but, generally, the rhetoric of disruption—a language of panic, fear, asymmetry, and disorder—calls on the rhetoric of another kind of conflict, in which an upstart refuses to play by the established rules of engagement, and blows things up. … [R]uthless and leaderless and unrestrained, and they seem so tiny and powerless, until you realize, but only after it’s too late, that they’re devastatingly dangerous: Bang! Ka-boom! Think of it this way: the Times is a nation-state; BuzzFeed is stateless. Disruptive innovation is competitive strategy for an age seized by terror.”

All of this brings me to advocating for you (your life) and your business: be disruptive. Think of your objective in a new and different light. Think of your competitors and their objectives and reevaluate if this is really your goal as well. Or do you want something else? And if it’s your goal, think of a great new and innovative way to get there. Be Apple! Be Uber! Be Beyonce!

Don’t be afraid to cause a scene and make a splash. Let your competitors know you’re there. Make a statement and shake things up. Do the unexpected and be innovative. Get out of your comfort zone. Take a different route. Create some chaos. Disrupt the ordinary and be a leader!